This represents the first year of the 23min of Ska podcast, all 23 episodes. Some of these episodes I’m extremely proud of, the tribute to the Specials (Special : Sept 23) and the foreign language episode (Foolish : Apr 11) in particular. I got some help from listeners Burt, Nicole & Ben who suggested songs, and I got to know the band Do It With Malice. All in all, a good start to this young ska podcast. 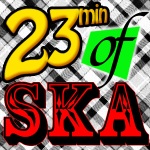 Commencement : Jan 23, 2010
I’ll admit I played it a little safe and unoriginal here, but it was while listening to these songs that I got the idea for this show.

Following : Feb 11, 2010
Like last time I had a lot of fun putting together these songs for you to enjoy, so I hope that you do.

Trinity : Feb 23, 2010
What’s really been fun with this project is pulling out some CDs that I haven’t listened to in years and rediscovering some old favorites. I hope this has the same effect for some of the listeners and introduces something new to others.

Те́трис : Mar 11, 2010
In this episode I’m pushing the limits of third wave in a few directions. Some towards the punk side, one in the rocksteady direction and one even towards pop. One of the things I really liked/like about ska in general is how it can blend with other genres well and still retain its own sense of self.

Meanies : Mar 23, 2010
Woo! More ska, and it is some of the meanest, rudest ska around this time for you. Or maybe not. I could’ve went more crass, but that didn’t turn out to be nearly as much fun as I thought it would. If there’s a theme at all, I think it would be that a lot of these bands never really got their “due” as it were.

Foolish : Apr 11, 2010
Basically I was foolish to even attempt to do an entire English free podcast. I tried.

California : Apr 23, 2010
Some commercial declared it “California Music Month” in April on some ad I saw on late night television, so I said “I’ll run with it!” That’s right, all these bands are from my new found home of California.

Infinite : May 11, 2010
Woo! The infiniteness of ska! Spanning several decades! And yet, save the opening song, this is the most ’90s centric episode I’ve shared.

Rebirth : May 23, 2010
In a few short days it will be my birthday, hurrah! What better way to celebrate than with some of my favorite ska songs?

Sanity : Jun 11, 2010
Back in my youth I was even less put together than I am now, and while I’ve never understood how people say “music saved my life,” I can without a doubt say that music kept me sane. Sane and out of trouble. And no genre more so than ska and ska/punk. It really is a lovable community!

Cool : Jun 23, 2010
Now that it’s officially Summer it is time to cool off w/ some music and ska ranks right up there w/ lemonade for me a perfect laid back sunny day. Also, if you figured out this episodes theme then good for you, you’re totally awesome and don’t forget to watch the right.

Midway : Jul 11, 2010
Here we are at the half way mark of the first year of “23min of Ska” and I think it has went pretty well. I had to go and double it up and spread the ska love far and wide! Speaking of love and ska I can’t believe this is the first time I’ve worked the Skatalites into an episode!

Streets : Aug 11, 2010
The streets, you should be dancing in them, you’re listening to ska! Here’s another fine collection of music from my collection.

Schooled : Aug 23, 2010
It is back to school time! Woo! Or not, I guess it is completely up to you how you feel about school and schooling, but that’s not what we’re here for, we’re here for some ska.

Uncontrollable : Sept 11, 2010
Here we go! I’ve tried to gather not only a bunch of good songs, but also a handful of overlooked songs from some awesome bands! I’ve pulled from my 7″ collection, import CDs, albums that have went out of print and even some from albums that were never officially released!

Special : Sept 23, 2010
Welcome to a very Special episode of 23min of Ska. Why? Well I’m presenting to you the very first episode dedicated to a single band, and that band is the Specials. The first 4 songs are songs that inspired/were covered by the Specials, and the last 4 are covers of songs the Specials wrote. Easy.

Alive : Oct 11, 2010
If you’re into ska you know the very best thing is ska done live. I can honestly say that I’ve never left a ska show unhappy or disappointed and I can say for a fact that some of the best concerts I’ve ever seen were ska shows! For these reasons I knew that sooner or later I’d be doing a show of all live music, that and a few of these songs are only available live!

Backfire : Nov 11, 2010
Quick, name things that backfire! Cars! Guns! Getting anywhere in LA because of all the traffic! So yeah, a bunch of songs about guns, cars and traffic.

Return : Nov 23, 2010
It’s Thanksgiving time. A time to return home, see your family, hang out with old friends & maybe meet some new ones while you’re back in town for a few days.

Dimed : Dec 11, 2010
I’m hitting you, over and over again with fresh 2010 ska & ska/punk! Of course, being out of touch I had to do some research and I found some really good new bands that put out some fresh awesome music and remembering that there’s some classic bands that are still at it putting out quality albums in 2010.

Merriment : Dec 23, 2010
…and thus ends our first year at 23min of Ska. I certainly hope that you’ve enjoyed listening to it this year. It started out a small dream, a dream that’s grown over the year, and I hope to grow more next year!