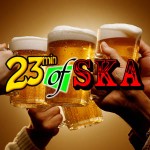 So a few weeks ago I asked folks what song got them ska and I got a lot of good answers. So many good answers I made that the theme of last week’s episode. But there were some more great songs left over that I didn’t get to include, and after I posted the last episode I received more comments with more great tracks that got folks into the ska sound. Basically, I couldn’t resist doing another fat stack of your favorite tunes so soon.

Show support for the band by clicking on those links and checking out their websites and music! Show support for the podcast by finding & liking 23min of Ska on facebook as well as follow on twitter. Also, feel free to download this episode if you wanna keep it forever. Another way to support the podcast is to buy some records from our partners in crime over at Grandpa’s Casino Recordings, they carry some great vinyl ska records!

Woo! More ska, and it is some of the meanest, rudest ska around this time for you. Or maybe not. I could’ve went more crass, but that didn’t turn out to be nearly as much fun as I thought it would, so much for a “theme episode”. If there’s a theme at all, I think it would be that a lot of these bands never really got their “due” as it were, in fact I think only the Suicide Machines did. I think the Blue Meanies were close and of course the Hub City Stompers, Amphetameanies and Johnny Nine & the Racers still have a chance if anyone would pay attention to how good they are. Sorely missed are Secret Society who are all but forgotten but always put on a hell of a show, and their album isn’t even bootlegged on dozens of websites like a lot of their other late 90s contemporaries.

If you’re in a ska band and would like to be featured or if you know some music that you think I should hear for future inclusion, please email me!

You can also subscribe to the podcast by going to your advanced tab on iTunes, then select “subscribe to podcast…” and entering this: http://23minofska.podomatic.com/rss2.xml into the box that opens. Alternately, you can even download it.