Tagged big ska gamble, do it with malice, kickstarter, Lockstep, ska, ska-punk, Stop the Presses, the Action League, the Georgetown Orbits, the Shifters 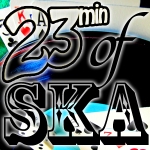 This episode was created to show off the many bands that are taking part in the Big Ska Gamble, a Kickstarter campaign to bring you a 7″ vinyl record subscription club of all ska bands. You get to hear 6 different songs from the six bands represented. These aren’t the songs that are going to be on the records that come out, but good representations of these excellent bands.
Check out the project at the Big Ska Gamble (http://www.BigSkaGamble.com)

This episode and all episodes can always be found here. You can also subscribe to the podcast by going to your advanced tab on iTunes, then select “subscribe to podcast…” and entering this address: http://23minofska.podomatic.com/rss2.xml into the box that opens. Also if you’d like, find & like us on facebook. Go ahead and download this episode and throw down with the Big Ska Gamble.

I’m the lucky guy who not only got to talk to not just one, not just two but three members of the legendary Boston reggae band Pressure Cooker! I spent most of my time talking to Jeffrey Eckman (Drums) and Robin Teague (Tenor Saxophone) about the formation of the band as well as their concert backing up some first wave ska luminaries. We are eventually joined by Adam Dobkowski (Guitar) and talk a short bit about the writing process that Pressure Cooker employees. We then shift gears to talk a bit about how they’re using kickstarter to raise money for their newest album! Only $800 left to go at the time this episode is getting posted! Not too shabby! We also discus a bit about the ups and downs of the ska scene in America throughout the late ’90s into the Twenty First Century. There’s lots of laughing, you’ve been warned!

If you’re in a ska band and would like to be interviewed or have a song featured, please email me at radjose[at]gmail[dot]com.

This episode and all episodes can always be found here. You can also subscribe to the podcast by going to your advanced tab on iTunes, then select “subscribe to podcast…” and entering this address: http://23minofska.podomatic.com/rss2.xml into the box that opens. Also if you’d like, find & like us on facebook. Also, feel free to download this episode.

Pressure Cooker, Their 7th Album & You!

Pressure Cooker is a great ska/rocksteady/reggae band out of Boston, MA. They are ridiculously good. So good, I feel bad for forgetting about them for a while! I’m an idiot sometimes! Here’s what they’re up to now if you were curious, they’re making their seventh album! Yep! Album number 7! And you can help out by kickin’ over to their Kickstarter page and throwing down some dough to help them out. Your reward, of course, is some great music!

Help Out the Pinstripes Release Their New Album

Ohio’s own, the Pinstripes have an album that is ready to go. Almost ready to go that is. They need some cash to make it happen. So, they’re takin’ it to Kickstarter to try and get the funds. Seriously, check out all the information. Every donation level gets you special things from the band for helping them out. Heck, if you donate even $1 you’ll get a digital EP! I’ve never seen an offer on Kickstarter like that for a dollar! Usually a buck gets you a “thanks,” here the band is giving you music for your money! DO IT!

Tagged I, kickstarter, the Pinstripes