The fourth set of 23 episode of ska goodness! The show goes weekly, the monthly interviews are dropped, and far more than 23 episodes will now fit in a year. This results in the odd breaking up of 23 episode arcs to years thing that was going for the first 3 years and first 3 sets/sessions. Continuing the trend, all episode titled consist of 4 words, most episodes are also pairs, with the titles of each connecting them in some way. This session started on January 10th, 2013 and ran until August 8th, 2013.

Session Four
Welcome to the Now! : January 10th, 2013
Here we go! Music, music, music! Ska, rocksteady, ska/punk and even some reggae edging stuff… why? Because it is awesome, it is all awesome!

Living on the Edge : January 24th, 2013
Here we go with another awesome episode of 23min of Ska. There is some pretty fresh tracks on this one!

Goodbye Old Love : February 7th, 2013
What sucks? Love? No, love is awesome. If you don’t have awesome love, I feel sorry for you, cuz brother, that ain’t love. If you must call it that, call it old love and kick it to the curb, it ain’t doing you no good. Now get out there and embrace some new and awesome love, come on, you dig ska music, you totally deserve it! 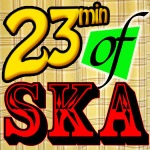 Hello to New Life : February 14th, 2013
Here we go! Another week of great ska music! Old & new, from near and far, by friends and strangers, it’s all good stuff. This is the 73rd of the regular standard 23min of Ska show, and that still BLOWS MY MIND! A little idea back in December of 2009 that started on Jan 23rd of 2010 has grown a lot! Thanks for sticking around, seriously! Enjoy the music!

It could be Great : February 28th, 2018
I was sick on vacation. It sucked. I’m supposed to be relaxing, getting some sun and hanging out on the beaches or something. Instead I’m stuck inside. Boo! On the upside I got a bit more time to jam out to a bunch of forgotten and new songs on my ipod, which resulted in this exact episode.

Day in the Park : March 7th, 2013
I want to go to the park. Go to the park and put on some good music and dance. Dance my ass off. The sun and warmth is coming, but the ska beat will ever be at your side to guide you towards it.

Night on the Town : March 14th, 2013
Woo! Look at that! Another new episode! I hope that you all enjoy this episode as much as I enjoyed finding some of these bands and songs and putting them together!

the Very Next Day : March 21st, 2013
Another day, another morning, starting off in the bedroom (or your best friend’s kitchen floor) knowing that it is time to go again. Time to do whatever it is you do in a day.

End of the Evening : March 28th, 2013
It is the end of another night out on the town, what kind of craziness did you get into? Me, not too much, beers drank w/ old friends from back home, catching up w/ some family and friends, so you know, the usual, it is what late nights were meant for.

Take All You Want : April 4th, 2013
Oh my gosh, I’ve just noticed what I’ve been missing lately on this podcast! Ska-Punk! So you better believe that I weaved a some of that into this episode. Not that I dropped any more traditional stuff, it’s just all in a nicer, more balanced blend this time.

It’s All You’ll Need : April 18th, 2013
I hope that you all find this episode in good health and good times, and if not, may they come to you soon.

Long Live the Spring : April 24th, 2013
Spring time is fast approaching, and Spring time is the perfect time for some ska music! At least I always thought so. This if for you, you who enjoy Spring, drive w/ the windows open, take a hike, or lounge in your backyard to crank up some ska!

a Return to Form : June 6th, 2013
Here’s a bunch of great and modern ska bands from all over and a few of the greats from the more recent past. I hope that you continue to enjoy what I’m doing here week to week.

Kick Start My Heart : June 13th, 2013
I’m a fan of Kickstarter, have been for a long long time, pretty much since I’d heard of it back in ’09, and in my time I’ve backed mostly music projects, and of those mostly ska projects. I like being able to support the bands I love as direct as I possibly can, also, I like to support newer acts that just need that last bit of cash to get the record out. Here’s 8 songs from 8 bands that I have personally thrown down cash for. Trust me, you’re going to love this episode.

Hello, My Name Is : June 27th, 2013
This one is for everyone that tells me that they can’t remember the songs that are played from week to week. The complaint is that they’re not sure what band is what. So I made it easy for all them. Each band is singing a song named after the band. If you have any questions, it is right there, wait for the chorus to come around again! Easy, huh?

Belly Drums All Night : July 3rd, 2013
This episode came together quicker than I thought it would, I knew a lot of great songs that I wanted to use and they all just snapped into place.

Sarcastic Episode Title, Too : July 11th, 2013
Why do I do shows like this? Ones w/ non ska bands playing ska songs? I don’t know, they’re kinda fun. Fun for me at least, I hope they’re also fun for you too. Put on your dancing shoes and get down to some ska inspired songs from bands that don’t usually bust out the beat. It’s a sequel to this episode!

Holding the Power Ring : July 18th, 2013
I’m lucky that my computer, which is in ill health, was able to complete this episode! I’m also lucky that I get to get another episode full of great ska music out to all of you too!

Hats Off to Haters : July 25th, 2013
Apparently, I’ve been going about this all wrong. Ska/Punk music is the devil! I shall cast that evil off of this episode! Get back to the roots! Be a proper ska podcaster! But lo, still I fail. Why? Because I dare to support the modern ska bands that are still out there playing. Is this a problem? 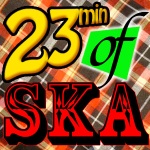 2 L8 4 H8 : July 31st, 2013
As much as I love when listeners reach out to me, when I get some kind of hateful reaction to 23min or Ska it drives me bonkers. It really gets under my skin. Also, the less knowledgeable the reaction the more it is going to eat at me. Last week I was proving to the hater in question that he was wrong about this show and was taking the high road in terms of programming. But the week ate away at me, this is the reactionary, snot-nosed, fuck off episode I wanted to make.

Going Out in Style : August 8th, 2013
Could this be the end of 23min of Ska? The ska podcast you’ve all come to love and/or loathe? Nope! No one is that lucky! I shall just journey on, trying to bring you all great ska from around the world. So, you know, pretty much good times for all! Well, as long as you’re the type to dig ska at least.