Here’s the eighth session of 23min of Ska consisting of 23 episodes running from February 12th 2015 to later in 2015. I tried to name every episode after something to do with number eight. Didn’t work as well as I thought it would, but I still got a lot of quality episodes from the idea. 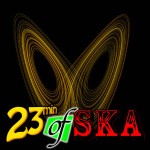 Things fall apart. Things go to hell. This is how the universe works. It is time to get used to it. Take this episode for example. I had no idea what I was going to do. I have been kinda sick all week and had few ideas, so yeah, I though this is going to be a tough one. It wasn’t. It was a breeze! It all fit together! And hey, look, two different songs w/ the same name, I surely didn’t plan that! Chaos rules! 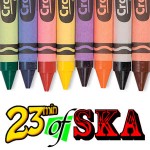 This is the most colorful episode of the podcast that I’ve ever done! Enough with the puns, on w/ the great music! I hope you all like ska and ska/punk, cuz that’s all your getting. Sorry this write up is short, but I’m on my way to Texas for a wedding, fun time!

To be updated soonish….